In today’s session, The second session of our Project we have looked at and discussed Environments and the designs behind them. We looked at different styles and how if we want to be good designers we need to get out of our comfort zone, the place in which you do the work you are good at and comfy doing it. Comfort zone is the worst place for a creative to be unless the work you have been tasked with is in that relative field, but this is rare and as creatives we will be asked to do things that we may have never done before, so it is good to finally get out of that zone and stretch my legs. So we then went on to look at cultural differences and how they influence Architecture, Civilisation and also the Afterlife in most culture.

During this talk i had plenty of ideas for my Stargate project, how i can have the game set in all different time periods because with the stargate you can travel to worlds with humans still growing technologically and have scenes set in all different time periods. We have had a brief look at how natural disasters such as Earthquakes, Floods and Meteors can have an effect on any scene, for example if a city had an earthquake and the tectonic plate sunk on one half of the city, you would be left with a city split in 2 and have no way of reaching each other and this would make for very interesting concept art.

“Consider what has come before and how it may change something”

After this we had a little look a method for adding depth and more realism to concept art and art pieces, this method is a Fade or Fog, this gives the sense that things vanish into the distance and it also gives the scene a lot of scale. Something simple like a lamppost in the foreground of the view of the scene it gives places the viewer in the center of the scene and with things up close they feel like things could be behind them, also things like a man or a post box next to a building or car really helps give the viewer something to compare how to scale something is.

Gareth Sleightholme – Immersion and links to Games as well.

After this discussion we moved on to talking about a Design Process and how to make things in scenes, for example a shop, look and feel like a shop. This lead onto a talk our tutor had with a student trying to design a shop but whatever he did, didn’t seem to work. Our tutor then presented him with a question “What kind of shop is it?” the students reply was “Just a generic shop” and our tutor then went on to explain that no shop is generic and that everything in those shops have people behind them that have designed these products or adverts or even the architecture of the building, this then lead onto a quote that i think is going to be valuable to me in my entire career,

I think this quote is genius because it makes you think about everything and how it was designed and who it was designed by, the next time you play a game look for things like this and see how good, or bad, the Production Designer or Art Director really is. We spoke about putting the audience in the scene, so this thing about nothing being generic will help your Audiences immersion, so things like a computer or book on a desk will not always be at a perfect 90 degrees and often will be off on a slant and very rarely perfect, the sign of a good production designer or art director is to go unnoticed, this means you don’t notice their work while playing a game or looking at a piece of art.

After this we touched briefly on the Atmosphere of a scene, this could be down to simple lighting on a bedside desk to make the scene feel warmer or sun flare coming through a window onto a huge sculpture drawing your attention, both equally as important as each other when trying to portray a message.

Finally we have been shown how some artists make a lot of design thumbnails before deciding on a final piece, so doing the same scene but in different angles and from different points, this is when we was left on our own to start our design for our scenes and make some rough sketches, here is one i did and scanned into the computer at 300 DPI 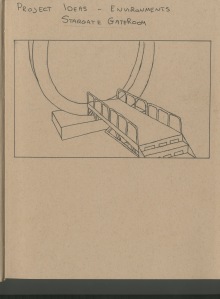 It is a stargate drawn in 2-point perspective, after looking at the picture when i scanned it in i realised i should have done it in 3-point perspective but it is a mistake i will learn from, i will post more pictures of my skecthes as and when i finish them.